Blog - Latest News
You are here: Home / News / For one Communication Studies graduate, the sky is not the limit 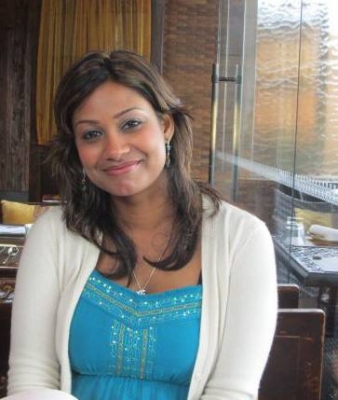 The 32-year-old Communications Studies major was born in India to a Portuguese father and an Indian mother.  She led a sheltered life as the only child of academics who held progressive and feminist ideals for their daughter’s future. She played tennis, studied hard, engaged in intellectual discussions with her parents, and planned for college.

“All this was taken away from me all at once.  I lost both parents in a car accident. In India we don’t have foster care services. I was on my own.”

Turning to her extended family for assistance proved difficult.

“It’s a huge burden for people to take care of a young female relative because of the costs associated with marriage,” D’Souza said. “I was already considered a rebel child. My mom had raised me to be very strong and independent.  No one wanted to take me in.  They basically told me either you become the unpaid housekeeper or get out.”

Assisted by the principal of the high school where she had been a star student, D’Souza became focused on survival, working at a local Sheraton Hotel during the day and studying at night with the hope of some day attending college.

When she was 20, D’Souza’s role as liaison between the hotel and Singapore Airlines opened a door.

“One day they asked me, ‘Have you considered being a flight attendant?’”

Excited to see the world, she immediately grasped the opportunity.  However this meant she would have to spend her savings on obtaining a passport and continue to put college on the back burner.

Still, D’Souza never relinquished her hunger for school. One day, passing through L.A. for work, she was brought to UCLA by a friend.

“I saw LuValle Commons and I cried,” she said. “I saw students talking and studying. I thought, ‘This is where I was meant to be. How do I make this happen?’”

At UCLA D’Souza finally found not only academic opportunity, but a sense of family and a home.

“I think UCLA is amazing because it doesn’t matter who you are or where you come from.  You have so many opportunities.”

D’Souza was offered a job at Sony Pictures after graduation but instead accepted an offer to work for UCLA External Affairs.

“UCLA was and is my dream school,” she explains.  “No place inspires me like UCLA. This is the one place that makes me want to do my best.”

Eventually D’Souza would like to pursue graduate study in international public diplomacy.  She said that her circumstances gave her no choice but to put into action the independent ideals her parents instilled.  She believes that this experience, combined with UCLA’s excellent academic preparation, is the ideal foundation for her future.

Good things come to those who work hard