Blog - Latest News
You are here: Home / News / Good things come to those who work hard 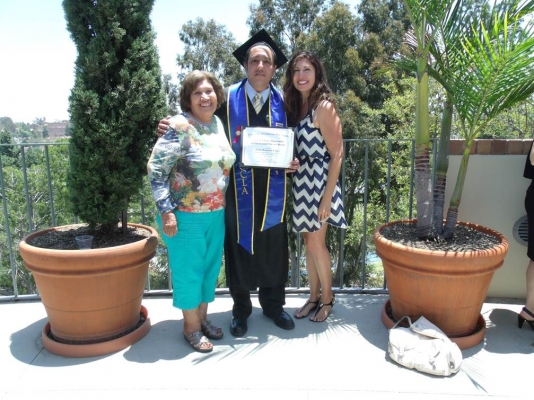 After his first quarter at UCLA, History and Chicano Studies major Cirilo Gamez was too nervous to look at his GPA. This developed into a personal policy to which he remained faithful during his three years on campus.

“I decided never to look at my GPA,” he said.

Instead, he took the continuation of his Bernard Osher Foundation Scholarship each quarter as proof that he was at least earning passing grades.

When Gamez, who is 47, got his UCLA acceptance letter, it was the fulfillment of a lifelong dream that had been many times deferred. “Homegrown,” as he puts it, in the East L.A. community of Boyle Heights, he had taken occasional field trips to campus as a child.

“The campus called to me,” he said.

But his life took a different path after high school.

“I started my adulthood as a marine,” explained Gamez. “I got into legal problems and the judge gave me a choice. I chose the marine corps over jail time.”

A reservist, Gamez was activated on his last day of service. So instead of heading home to L.A. and attending East Los Angeles Community College, he found himself in the first Gulf War.

“I was mobile air traffic control,” Gamez said, “First ones in, last ones out.”

Finally admitted to UCLA as a transfer student in 2011, his elation quickly turned to anxiety as the speed of the quarter system and the rigor of his course load became apparent.

“By the fourth week, I’d spoken to my counselor about dropping out, but she told me to hang in there,” he said.

Throughout his time at UCLA, Gamez owned neither a car nor a computer, which tied him to campus. He couldn’t afford apartment rents in Westwood and his mother’s home was about five hours away by bus. He even became homeless at the start of his studies briefly.

These hardships made him more keenly aware than most students of the rich academic opportunities UCLA has to offer. Part of the Academic Advancement Program (AAP), the nation’s largest university-based student diversity program, he marveled at the wealth of resources, facilities, and supportive faculty.

“I did everything on campus. I wouldn’t leave until everything got done,” Gamez says.

Gamez is a self-described “nerd” in his devotion to Los Angeles. A double major in history and Chicano studies and a minor in labor studies suited his obsession with the city’s history, music, food, art and culture. One of 11 children raised by a single Chicana mother, he is particularly passionate about gender issues in the community. One of his most memorable UCLA opportunities was a Labor Studies internship at the downtown Garment Workers Center. This added a wealth of knowledge to the experiences of his childhood.

“My mother was a seamstress and worked in those factories for many years. She would bring home piece work that we would work on just to get by,” Gamez said.

He is contemplating a masters in history or a law degree as his next move and plans to work on labor issues in the U.S.

On graduation day, Gamez finally allowed himself to know his GPA. He noticed that his name on the program had an asterisk beside it. Unable to find his glasses, he asked his sister read him the footnote.

For one Communication Studies graduate, the sky is not the limit

Social Science students travel the globe in the name of research