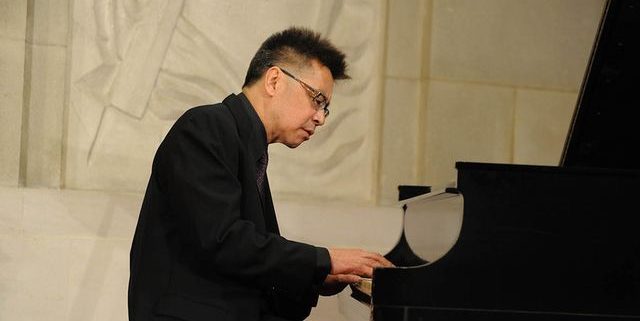 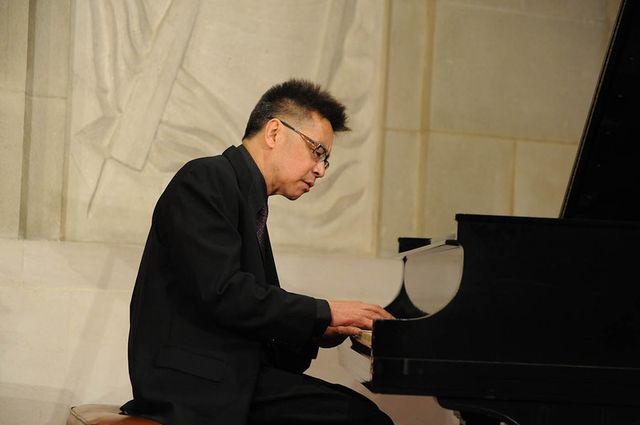 Courtesy Jon Jang
During his residency composer Jon Jang will reunite with UCLA professor Renee Tajima-Peña; the pair worked together on her film “My America (or honk if you love Buddha).”

The UCLA Herb Alpert School of Music Department of Ethnomusicology will welcome pianist and composer Jon Jang for a week-long artist residency, from Jan. 16-20. Jang’s music has been likened in the New York Times to the “… ‘Third Stream’ composers of the 50’s who married jazz and classical music. Jang honors his two idioms without fully merging them.”

Among Jang’s best-known works is “The Chinese American Symphony,” which honors the Chinese immigrant laborers who built the first transcontinental railroad in the United States. This composition is the first symphonic work by an American-born Chinese composer to honor Chinese American history. Other epic works include “Tiananmen!”; “Reparations Now! Concerto for Taiko”; and co-composed with UCLA distinguished professor of ethnomusicology James Newton, “When Sorrow Turns to Joy – Songlines: The Spiritual Tributary of Paul Robeson and Mei Lanfang,” which was commissioned by UC Berkeley’s Cal Performances.

During the course of his residency, Jang will perform as a member of his quintet, the Jon Jangtet, and he will present a solo piano and storytelling performance at the Fowler Museum at UCLA. Jang also reunites with Renee Tajima-Peña, UCLA professor of Asian American studies, for a conversation following the screening of “My America (or honk if you love Buddha),” directed by Tajima-Peña with his original score. A lecture and ensemble coaching will round out the week’s events. 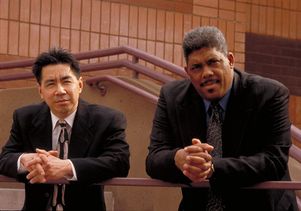 Jang’s collaborations have ranged from working with world-renowned saxophone-composer-bandleader David Murray, to drummer Max Roach and the Kronos Quartet. He is a founding member of Asian Improv aRts, established in 1987 to produce, present and document artistic works that represent the Asian American experience. His scholarly work includes lectures such as “The Sounds of Struggle: Music from the Black Liberation Movement of the 1960s to the Asian American Movement of the 1980s” and “One Day American, One Day Alien: Black and Brown Artists Who Made the National Anthem Their Own.”

All programs are open to the public. For more details, please see individual event listings or go to the school of music calendar.

Jan. 16:  An award-winner at the Sundance Film Festival, “My America (or honk if you love Buddha)” is an Asian American road odyssey set amidst a subculture of old school rappers, debutantes and freedom fighters. Twenty years after the film’s premiere, composer Jon Jang and writer-director Renee Tajima-Peña will reunite for a screening and conversation, with ethnomusicologist Kim Nguyen Tran, to discuss the hybrid cultural influences of the film and its music.

Jan. 18: During the lecture “Traditions in Transformation: The Musical Language of Jon Jang Composer,” Jang will explore heterogeneity in music as seen through the lens of his works that are hybrids of Chinese folk songs, black music and European classical music.

Jan. 18: In commemoration of the 30th anniversary of the Civil Liberties Act and the victory by Japanese Americans for redress and reparations, UCLA lecturer Hitomi Oba’s contemporary jazz ensemble will interpret Jang’s work “Reparations Now! Concerto for Large Music Ensemble and Taiko” in a session of ensemble coaching.

Jan. 20: At the Fowler Museum: “How I Got into Music and How Music Got into Me: A Piano Performance and Storytelling by Jon Jang.” From practicing on a piano in a black church to prepare for his senior recital to the black church congregation attending his concert at the Oberlin Conservatory of Music during the 1970s, Jang performs a solo piano performance and talks about how he got into music and how music got into him. Saxophonist Hitomi Oba will join Jang in the second half of the program.