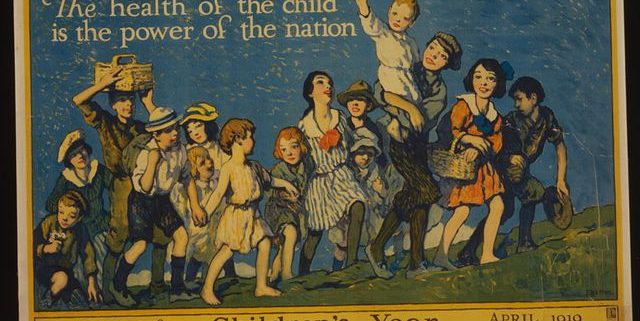 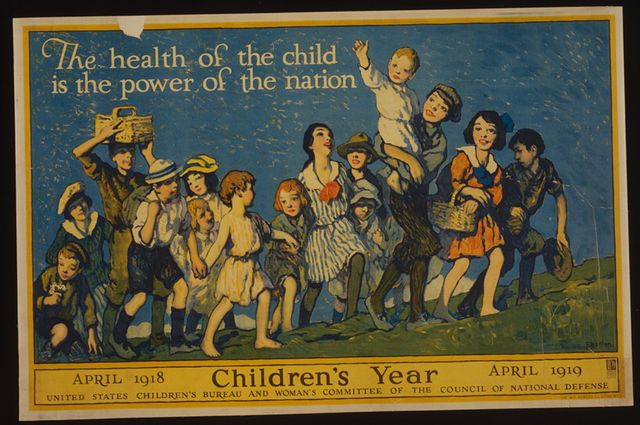 Library of CongressPoster related to the Mother’s Pension Program, the first U.S. welfare program, which was aimed at keeping indigent children out of orphanages.

Adriana Lleras-Muney is a professor of economics at UCLA. This column originally appeared in Politico.

It might sound like a commonplace, but if we want American adults to be healthier in the future, we should invest in children today. The food we eat when we’re young, the air we breathe, even our social and emotional environment, all shape the development of our bodies and minds. Poor children start out with a health disadvantage from the beginning, breathing dirtier air, drinking tainted water, eating inferior food, studying in bad schools which they leave sooner, and in general growing up with more stress and fewer opportunities. All of these factors have been shown to harm their physical health in the short and the long run. Poor children turn into unhealthy adults.

But what’s the most effective way to fight the health effects of poverty? That answer isn’t as obvious. The U.S. welfare system, which should combat poverty and its adverse effects, focuses primarily on ensuring that only the deserving poor receive aid. It employs stringent systems to assess eligibility for every program designed to help the poor. Conditions are attached on parental behavior, such as work requirements. And most support is in-kind: Instead of cash, the U.S. prefers to offer food to the hungry, and health insurance to the uninsured, etc. These policies seek to keep program costs down. But in the end, the U.S. has among the highest child poverty rates in the developed world, with almost 1 in 5 children growing up in poverty.

There’s another philosophy, which is to just give poor families cash. This sounds more like the older model of welfare, one that American policymakers have moved away from, worried that the system was abused by adults and the money wasted, rather than used to help kids.

But does it really get wasted? It is a difficult thing to test, but we analyzed the results of a past U.S. welfare program, and the answer is unequivocal: Giving cash to poor families is really, really good for children.

I’m an economist, and I’ve crunched the numbers on “the Mother’s Pension Program,” a cash-based welfare program begun in 1911. It might seem odd to look at a social program more than a century old to draw lessons for today. Most of the recipients are long dead. But that’s actually why looking at the Mother’s Pension Program is so valuable: we can track the impact of the program over the course of the recipients’ entire lifespans using census, military and other government data. And there’s even a comparison group: Some families were rejected from the program mostly because their incomes were a bit too high to qualify. We can use children in these families to assess how they fared over the course of their lives relative to those who received cash. They did not do as well.

The Mother’s Pension Program grew out of an investigation into the effects of poverty on children begun by President Theodore Roosevelt in 1909. At the time, children whose families could not support them were sent to orphanages. Slowly, the press and policymakers came to realize that even highly imperfect parents are far better than institutions at raising children: Children in orphanages were malnourished, with high mortality rates. Charities couldn’t provide for all of them. From this rose the Mother’s Pension Program, the first cash-transfer program in U.S. history, aimed at helping poor families with young children. It was adopted by almost all states from 1911 to 1930.

The typical family in the Mother’s Pension Program had about four children and received cash equivalent to about 30 percent of its total income for about three years — a relatively short period of time in a child’s life, but far more money than today’s levels of welfare support (which in most states is less than 30 percent of the federal poverty level, not of total income).

To understand its long-term effects, we matched more than 16,000 administrative records from the program to death certificates, 1940 census records and World War II enlistment records and compared the lives of children in the recipient families with the lives of the children whose families were turned down. We found that on average, children in recipient families lived one to two years longer. When the boys enlisted in WWII, they were less likely to be underweight. They also had higher levels of education and incomes. So in addition to being healthier than their peers whose families didn’t get extra cash, these children grew into more educated, higher-earning adults, too.

Was it worth the cost to taxpayers? A simple computation shows that the program’s rate of return is very high. The current federal poverty level for a family of five (the average family size of the typical recipient family at the time) is $28,780 in current dollars. Compare this cost with its benefit: An additional year of life for each of the four children in the family receiving the transfer. The lowest estimated value of a year of life is about $75,000. Thus, the life-extension benefits alone have a value of $300,000 — 10 times larger than a $28,780 transfer. A full cost-benefit analysis would include other costs (like administrative costs and work disincentives) and other benefits (like the additional taxes paid by higher-earning adults and their lower health care costs). But these numbers make it all but certain that the program brought a very high return.

Some worry that giving cash to the poor is a waste because the parents will not spend it wisely. But our research shows that on average, poor mothers used the money to improve their children’s lives. We do not know what they did with the cash — those records weren’t kept — but we do know their children were ultimately better off as a result of the transfer. This makes intuitive sense: Money is far more flexible than goods, vouchers or subsidies, and gives parents the chance to purchase whatever might be needed for the child. In the 1910s, that might have been a school uniform. Today, it might be internet access. It could go toward family expenditures (to fix the car, or move to a better neighborhood), or even to help the parents with something they need — since a child’s wellbeing is inextricably tied to that of his parents. Giving money, rather than offering in-kind goods and services, lets families use the money in the way that helps them most — and our research shows that on average, that’s what they did.

If you look at the overall economics of the current system, you quickly see that it isn’t just inefficient, it’s also expensive. In order to help only the truly needy without giving them cash, the U.S. has created a large and administratively complex government system: Temporary Assistance for Needy Families; Medicaid; food stamps; WIC (a program for women, infants and children); the Department of Housing and Urban Development; etc. Each of these programs has its own administration, eligibility guidelines and application processes. There is little coordination, a lot of duplication, a lot of hassle and a lot of waste. And still many needy families are not receiving help.

The U.S. has one of the highest poverty rates among industrialized countries, uniquely providing the least assistance to poor families with children, mostly in-kind rather than in cash. Let’s take a lesson from our past: It’s simpler, easier and more effective to provide cash assistance to poor families, and we know it will pay for itself many times over by raising the education, incomes and lifelong health of future generations.

Composer Jon Jang will be artist-in-residence at UCLA Herb Alpert School of...