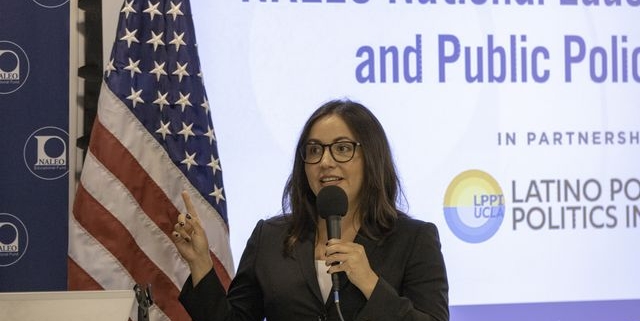 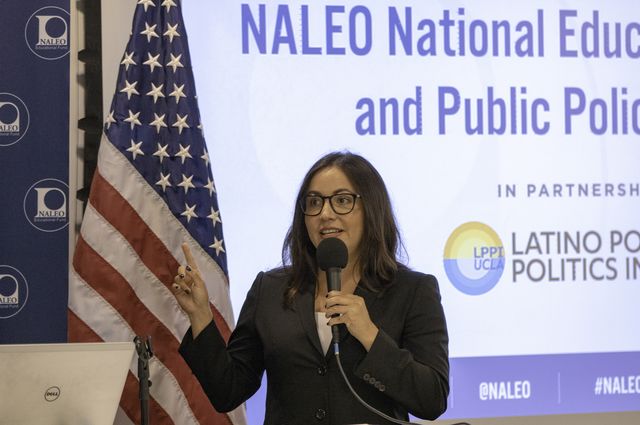 When elected leaders from across the country gathered at the UCLA Luskin School of Public Affairs for three days of workshops on housing, transit, criminal justice, education, public safety and immigration, a recurring theme ran through each conversation.

“Every issue, every single issue, is a Latino issue,” said Sonja Diaz, founding director of the UCLA Latino Policy and Politics Initiative and a 2010 graduate of UCLA Luskin who got a master’s degree in public policy.

Diaz was speaking to about 60 state legislators, county and municipal officials, school board members and higher education trustees at the first-ever National Education Leadership and Public Policy Academy, held Aug. 3–5.

Organized by LPPI and the National Association of Latino Elected and Appointed Officials  Educational Fund, the event was a “master’s course of our policy work … in the hopes that you will take this information and apply it in your communities,” Diaz told participants, who traveled from as far away as Florida, Connecticut and Hawaii.

Discussions led by expert panelists, she said, would be informed by two things: data and facts.

“By shaping policy and making sure this policy is tailored for kids, for immigrants, communities of color and, frankly, all Americans, we’re all better off,” Diaz said. “And we’re going to do it together.”

For Arturo Vargas, chief executive officer of NALEO Educational Fund, one major goal was how to get to the “great unengaged.” Many Latinos have little or no faith in the political system, he said, and “there isn’t any significant investment in Latino voter engagement in the United States.” 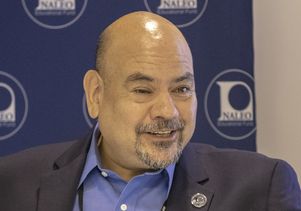 Citing the 2016 elections, Vargas continued, “Half of the Latino electorate was not part of the national conversation with the campaigns, and it happens consistently.” He urged officeholders to take up some of this responsibility in their districts.

The weekend series of presentations and workshops was supported by the Bill and Melinda Gates Foundation and by State Farm. It included opportunities to network with peers and while participating in group sessions, attendees developed tools and information to craft policy reforms on issues such as public safety.

Marisa Perez, a member of the board of trustees at Cerritos College, said many Latino students get their start in higher education at a community college.

“Whatever I can take back to my college to better support our students, that’s what I’m looking forward to learning about,” Perez said as the conference got underway.

Citing an achievement gap in his home state, Jon Koznick, a member of the Minnesota House of Representatives, said he wanted more hard data on issues related to Latino youth, especially boys.

“I’m excited to learn a little bit more about how we can have some stronger impact” in economic development and employment, he said.

Speakers and panelists at the academy included researchers from UCLA and other universities, as well as from policy institutes, foundations and associations.

Gary Segura, dean of UCLA Luskin, presented a case study on transit-oriented development in Oakland’s Fruitvale Village, that city’s largest Latino community. With co-panelist Chris Iglesias, chief executive officer of the nonprofit Unity Council, he discussed how the city used transit as a means for economic development and how that affected residents’ socioeconomic well-being.

Segura, a faculty co-director of Latino Policy and Politics Initiative, pointed to the initiative’s empirical study comparing Fruitvale residents to those living in similar communities over a 15-year period in the Bay Area and throughout California. The study found that, although the Latino population in Fruitvale changed by only 1 percent, homeownership increased by 8 percent, the bachelor’s degree completion rate climbed by 13 percent, and household income increased by 47 percent.

“So you can change a place without changing a people if you provide a set of economic structures and opportunities and services,” Segura said. 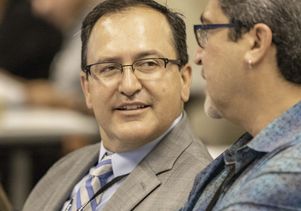 The dean encouraged participants to seek partnerships with local policy schools. “Oftentimes, communities of color think of universities as not invested in their issues, and, by the way, that frequently is true,” Segura said. “But there are places where that is not true and I would encourage you to look.”

“Why is the Latino population growing so quickly? Because we have an extremely young population,” said Barreto, pointing out that the largest population distribution is under age 5; for whites, the largest group is adults in their 50s.

“The population is growing at a rate faster now than most demographers 10 years ago were anticipating or estimating. And it’s almost entirely driven by U.S. births,” said Barreto, also a faculty co-director of LPPI.

Amada Armenta, who joined the UCLA Luskin urban planning faculty in July, spoke about the intersections between criminal justice and immigration enforcement systems.

Even in so-called sanctuary cities, contact with the police can have consequences for immigrants because of Immigration and Customs Enforcement’s practice of using criminal justice databases to find immigrants and staking out jails and courthouses to take people into custody.

“Interactions with police have important ramifications for the way people feel about local government, democracy and their place in society more generally,” Armenta said. “I want local leaders to understand that … true community policing requires changing police practices so that they align with priorities of neighborhood residents.”

In a keynote lunchtime address, Vargas of the National Association of Latino Elected and Appointed Officials, focused on the U.S. Census.

“The census is really only about two things: It’s about power and money: who gets it, who keeps it, and who’s denied it,” he said. “When the numbers are wrong, the allocation of political power is uneven.”

Legal battles over a proposed citizenship question are being waged in court, he said, but the public also must be heard. The U.S. Census Bureau is seeking public input on the 2020 headcount.

“We need your help, people,” Vargas said. “We need to fight this.”