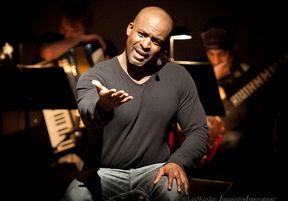 Bryonn Bain, associate professor of African American studies at UCLA, was awarded the Los Angeles Theater Award for solo performance for his play, “Lyrics from Lockdown.”

Bain’s theater productions critique what race, prisons, poverty and privilege mean in America today and the increasingly visible injustices in the U.S. criminal system. A one-man show, “Lryics from Lockdown” tells a story of survival that reveals how the justice system can radically change a young person’s life. The production weaves together the voices of more than 40 characters and is performed as a fusion of hip-hop, theater, spoken word, rhythm and blues, comedy, calypso and classical music, featuring a live band, beat boxer and video DJ.

The 2018 Los Angeles Theater Awards celebrate excellence on the Los Angeles stages in venues of 99-seats or under. This fourth annual edition included productions that opened between Jan. 1, 2017 and May 31, 2018.