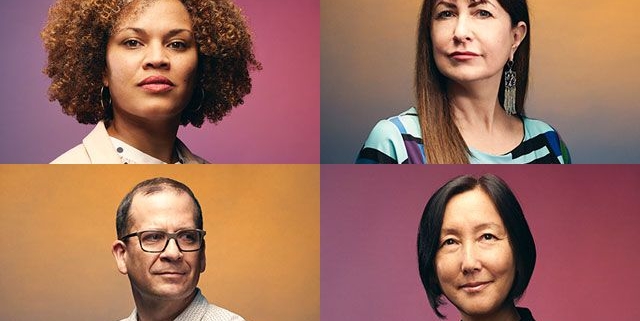 Under the administrative hub of the Institute of American Cultures for the last seven years, UCLA’s four ethnic studies centers today survey a society racked by conflict over race relations, anti-immigration rhetoric and headlines about white nationalism. Understandably, people are thirsty for insights and scholarship that address the unsettling tumult between whites and nonwhites in the United States. The centers’ leaders recognize this as a deep and ongoing struggle in the American story.

“At this political juncture, it sometimes seems we are taking two steps forward and six steps back, with populations that are most vulnerable under attack by political figures. It’s up to us in ethnic studies to explain unequivocally what is happening and why,” says Shannon Speed, director of the American Indian Studies Center and professor of gender studies and anthropology.

David K. Yoo, vice provost of the institute and professor of Asian American studies and history, encapsulates the situation: “Before long, the United States will no longer be a majority white nation, and the ethnic studies centers are well-situated to track this emerging America because we have been doing this work for nearly 50 years. Furthermore, the place of the United States in the world is shifting as other countries like China are on the rise.”

Ethnic center scholars interpret America’s changing culture through the lens of their work. Some fear that a recent rise in racial animus toward people of color has already done significant damage; others see it as part of an ongoing struggle. In the current political atmosphere, “We’ve seen the erosion of the norms of democracy, which especially hurts the lives of marginalized populations who lack an equal voice,” says Karen Umemoto, director of the Asian American Studies Center and professor of urban planning and Asian American Studies, who has spent more than 25 years studying racial conflicts.

From the Chicano Studies Research Center comes another perspective: “We once thought being American was based on values, principles and a code of conduct; it wasn’t about your family tree,” says Chon Noriega, longtime director of the center. “But a mobilized part of the country now claims that being an American is racially defined.” Noriega is concerned that while the UCLA ethnic studies centers were organized during the 1960s social movements, the country is now in the middle of another movement to undo any progress made. It’s up to the ethnic studies centers to “integrate research about their communities” into the institutions of the nation, he insists.

Ethnic studies research can also bring a sense of context to a country plagued by political drama. Kelly Lytle Hernández, interim director of the Bunche Center for African American Studies and professor of history and African American studies, recognizes the tendency toward myopia. “It may seem to many people that we are in an unprecedented crisis, but this moment is not crisis — it is clarity,” she says. “The contemporary tone of American politics is an unfortunately familiar chord in the context of U.S. history. The extraordinary histories of indigenous and racialized communities in the United States have much to teach about how to live through this moment. It’s a distraction to understand the contemporary situation with Trump as a new frontier. It’s not new. This is just the most recent face of a long struggle.”

Jerry Kang, vice chancellor for equity, diversity and inclusion, says the IAC’s work has never been more essential to UCLA’s mission to produce “relevant knowledge” useful to our communities. “In the context of divisive national politics, our ethnic centers’ fearless curiosity and rigorous research produce a critical knowledge base, which is necessary to build equity for all,” he says.

All of the centers’ leaders come together on one point: They rise to the challenge of their shared mission by using data, research, archives, art, storytelling and any other tools to move the understanding of African Americans, Latinos, Asian Americans and Native people from the margins into the mainstream of our diverse society. With that understanding they can build the framework of a more socially just society. Here is some of the intriguing work that is taking them there.

The U.S. overestimates its power to promote democracy or enable authoritari...