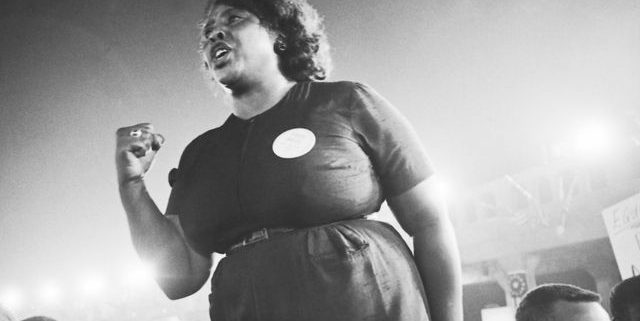 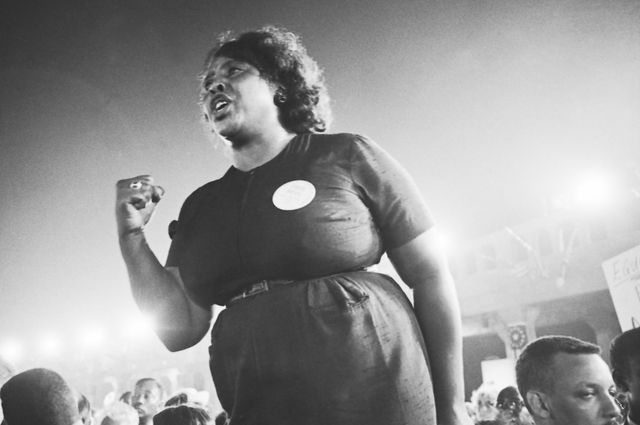 Ken Thompson Collection, Global Ministries, The United Methodist ChurchCivil rights activist Fannie Lou Hamer is one of many black women whose stories should be sung more loudly and widely, said panelists at UCLA.

Sometime around 1619 a young girl from the Congo was baptized and forced to board a Spanish slave ship. Her family was dead, most likely by violent means. She survived the dreaded middle passage, experiencing stench, disease, starvation and depravation.

We know pieces of her story and can speak her name because she is the first African woman whose arrival in North America was recorded. Her journey eventually delivered her as a slave to the colony of Virginia.

“Her survival paved the way for our survival,” said Brenda Stevenson, who holds the Nickoll Family Endowed Chair in History at UCLA. Stevenson was speaking during a panel discussion Feb. 8 titled “Why Black Women’s Lives and Histories Matter.”

The ongoing history department series “Why History Matters” partnered for the first time with the African American studies department at UCLA, as part of Black History Month.

Marcus Hunter, associate professor and chair of African American studies at UCLA, had asked Stevenson and her fellow speakers at the standing-room-only event to share the names of remarkable black women we may not know enough about.

UCLA alumna and Nigerian-American artist Funmilola Fagbamila called the audience’s attention to 1960s activist Fannie Lou Hamer, whose life and work panelists agreed can and should be more loudly and frequently sung. Hamer was a voting rights activist and leader in the civil rights movement who served as vice chair of the Freedom Democratic Party.

“Specifically what inspires me about Fannie Lou Hamer is her willingness to make it plain,” said Fagbamila, an original member of the Black Lives Matter movement. “Her willingness to address her experience and to just be plain to not sugarcoat it, to not make it too dense, to say it in a way that everybody can hear it plainly and to speak not only to the intellects of people but to speak to the emotion and heart of people.”

Hunter shared the name of Sakia Gunn, a 15-year old black girl, who being a lesbian, rebuffed the advances of a group of African-American men catcalling her in Newark, New Jersey in 2003. One of them stabbed her to death. He confessed and was sentenced to 20 years in prison. Her death sparked an outcry for the protection of LGBTQ individuals.

“I think we can do better about the collective trauma of witnessing black death that way, particularly in a time where like someone young dies and they are black and it’s everywhere,” Hunter said.

Fagbamila noted a historical and pervasive reticence to center the conversation of civil rights around black women or queer individuals. This has historically been perceived as divisive, because it draws attention away from the struggle of black men and boys, she said.

But, we can and should confront the ways in which both young black men and black girls are left behind in academic situations and affected by police brutality, she said. And we can think about what a liberated femininity looks like, from not just a Western lens, but from a global one as well.

Fagbamilia also recalled the backlash in the late 1930s against author Zora Neale Hurston and her novel “Their Eyes Were Watching God,” which told the story of a black woman living, marrying, loving and experiencing her life and full sensual nature. Hurston’s story did not conform to the prevailing narrative of black writers taking aim at the country’s “race problem.”

“There is this sense that if we are experiencing love and engaging in the fullness of our humanity that it’s going to take away from the conversation of us being repressed,” Fagbamila said. “That black women and black people have no business just simply being joyful and human, we must at all times be picketing something, we must at all times be engaging in some kind of resistance — this is a form of dehumanization.”

Dion Fountaine Raymond, discrimination prevention officer and coordinator for the UCLA Office of Equity, Diversity and Inclusion reflected on her personal history as a black woman and the ways in which she came to rely on a community of black female friends as she raised her son while working as a trial lawyer.

“Black women’s lives are so much greater than the challenges that manifest in so many ways and directions from targets of police brutality and disproportionate police contact, arrests, incarceration, negative stereotypes, struggle, abandonment,” Raymond said. “Far beyond those filters lies the truth of our majesty, enduring grace, swag, intelligence … all enveloped in whatever limitless choice of packages we may choose to showcase ourselves in at any given time.”

Raymond celebrated the names and accomplishments of the daughters of her two best friends’ — Linda Watts and fellow UCLA alumna Donna Barrow. Watts’ daughter, Devin Waller, graduated from UCLA with a degree in astrophysics and a graduate degree from the University of Arizona and has worked for NASA and now works as a program director at the California Science Center. Barrow’s daughter, Leigh Victoria Jonte, works as a casting director for the HBO series “Insecure,” which does a lot of outreach in Los Angeles’ black community.

“Black women’s lives and histories matter as much as ever as we enter a time I like to describe as the restoration of the divine feminine … which is always necessary to balance the majestic masculine,” Raymond said.

As the rallying cries of the #MeToo and #TimesUp shake foundations and instigate long-overdue consequences for sexual predators, Stevenson said she hopes we can remember the stories of some of the most historically vulnerable women in America — black slaves. They had no legal standing by which they could prosecute or defend themselves from sexual assault and punishments like branding, whipping, shackling and mutilation. An award-winning author, Stevenson will follow up her 2015 book “What is Slavery” with two upcoming volumes about slave families and enslaved women.

“Their stories have much to tell us about the unimaginable inhumanity of the powerful, and the boundless humanity of those considered without power who strive mightily to be free, safe, respected and well,” Stevenson said.

She shared the story of Susan Black, whose rape at the hands of her master when she was 12 years old kept her from her slave duties for three weeks, an unheard of amount of time for a slave to not be working. Years of subsequent assault resulted in the birth of just one son, a fact that enraged her master, causing him to beat her mercilessly under suspicion of finding a way to abort subsequent pregnancies.

Perhaps she was simply barren, or her young body damaged by abuse, Stevenson said.

It didn’t matter. Her master wanted the product of her body. He wanted more slaves. Even after Susan’s master died and she married, she was not safe, especially after her husband escaped to the North, Stevenson continued. Her new mistresses’ husband pursued and stalked her sexually, trying to cajole her into compliance, finally tying her up and whipping her viciously for her refusal to fulfill his desires.

Susan told her story to a physician after her eventual escape to the North, who recorded it in his journals.

And her story has survived.

We can speak her name.

Panel examines the convergence of art, government and the public space