Blog - Latest News
You are here: Home / News / Sociology / UCLA faculty voice: What we, as citizens, can do to fight genocide 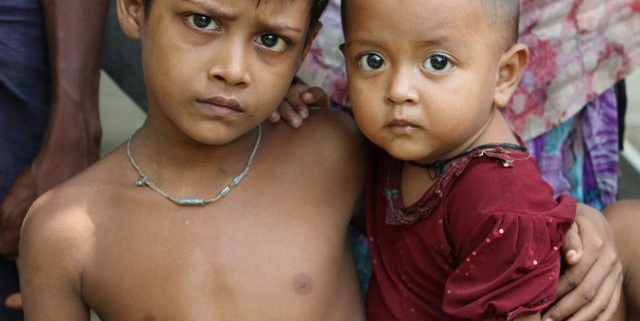 United to End Genocide/FlickrUCLA’s Aliza Luft says that increasing economic opportunity is a powerful weapon against violent oppression and could help the Rohingya being killed in Burma.

Aliza Luft is an assistant professor of sociology at UCLA. This column originally appeared in the Washington Post.

I was 10 when I learned that most of my family had been killed. My grandmother sat me on her lap, and in her Yiddish-inflected accent, she told me about her six siblings. All but one of them was murdered by Nazis, as were her parents. My grandfather and his sister survived the Holocaust, but the other four members of their family were killed as well.

Today, the Rohingya in Burma are being slaughtered by their government’s military and police. One Rohingya woman described how her baby was torn from her arms and tossed into a fire. My grandmother saw the same at the Kolomyia ghetto in western Ukraine: Nazis grabbed a child, threw it against a wall, and fed it to their dogs.

We observe Holocaust Remembrance Day this year while yet another genocide unfolds — and we seek to motivate Washington to act. But how?

Armed humanitarian intervention — the use of military force to alleviate human suffering — is improbable. From a pragmatic perspective, the U.S. has poured trillions of dollars into its never-ending wars, and is said to be quietly preparing for war with North Korea; intervention in Burma, which is also known as Myanmar, is not likely a priority. Philosophically speaking, it is also difficult to justify war in order to end violence against others. Legally, the United Nations charter proclaims “the sovereign equality of all states,” which also complicates intervention in Burma where the Rohingya are described as illegal immigrants and terrorists. And of course, there’s the matter of history: As the lessons of Cambodia, Rwanda, and Darfur make clear, the United States has a track record of failure to intervene to stop genocide.

Fortunately, military intervention isn’t the only tool. Citizens can pressure governments, companies, and global institutions to act in ways that mitigate genocide. To do so, however, we must understand some of the underlying elements that can lead to genocide and realize the levers we can pull to enact change.

My research suggests that state leaders can only go so far in implementing mass violence. Contrary to popular belief, most civilians aren’t secretly harboring grudges against their neighbors and waiting for the moment when they can murder them. In fact, governments draw civilians into group violence through a variety of mechanisms, including poverty and the lack of resources to resist extremists who recruit them to become foot soldiers. This requires money.

Thus, one strategy for intervention is to even the economic playing field: to lower the capital of the génocidaires while increasing that of their potential recruits. Responses can include targeted financial measures such as asset freezes and economic divestment from major firms that help fund genocidal governments. Additionally, non-governmental relief efforts might focus not only on food, medicine, and housing for the displaced, but also on creating economic opportunities to reduce the potential for recruitment by genocidal authorities.

In the Democratic Republic of Congo — where more than six million civilians have died since 1996 and mass rape has been described as “a fact of life” — mining companies have signed contracts with warlords to gain access to mineral resources, and are thus financing violence. The Enough Project has tried to break this linkage by compelling giant tech companies to create conflict-free products. In turn, civilian activists have helped to both impede mining production in the country and weaken militias through the direct targeting of corporations that traffic in minerals and fuel violence. Without money to fund their fighters, the militias can’t act.

Recently, a private alliance called the Myanmar Foreign Investment Tracking Project developed a database of 118 companies that invest or operate in Burma, and asked those companies to provide open records on their human rights commitments. Only 66 have responded so far, but the approach is commendable.

To deepen the link between investment or operations abroad and commitments to human rights, civilians can emply boycotts and social media campaigns to pressure these companies over their complicity in genocide. Research has shown that economic and reputational concerns can motivate a company to change its policies. It is time to mobilize on behalf of the Rohingya, and to target businesses whose taxes and revenue fund violence.

As an example, an investor coalition with more than $30 billion in assets has been pressuring Chevron to leverage its relationship with the Burmese government to promote change. As of now, the coalition represents only 6 percent of shares voted. Though the next meeting of Chevron investors isn’t until May, the International Campaign for Rohingya has developed a “No Business With Genocide” tactic to target Chevron and other companies doing business with Burma. The hashtag #NoBusinessWithGenocide sounds pretty good to me.

It is shameful our government has repeatedly failed to respond to genocide. Yet this should not leave those of us who care about making “never again” a reality feeling hopeless. Rather, we must cease waiting for an unlikely intervention, and instead take the initiative ourselves. The lives of too many depend on it.