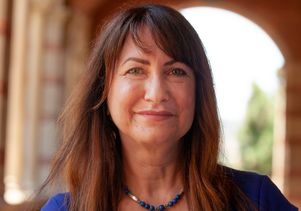 Shannon Speed, professor of anthropology and director of UCLA’s American Indian Studies Research Center, has been named president of the Native American and Indigenous Studies Association. Speed takes on a three-year leadership role in the professional organization that promotes scholarship and research into indigenous peoples from around the world.

“My goal is to contribute to the ongoing process of ensuring stability of our institutional and financial base, while fostering the broadest possible participation in our global Native studies association,” Speed said.

Through the association, whose membership is interdisciplinary and international, Speed said she is witnessing interesting trends in American Indian studies that find researchers and scholars focusing not just on the histories of indigenous cultures, but their future impact on global culture and the global economy.

Speed is a citizen of the Chickasaw Nation and has been involved with NAISA for eight years. Her research spans indigenous people from North American, Central American and Latin American nations. She calls her focus a “hemispheric approach” to indigeneity.

Her goal is to inspire students and other scholars to rethink settler-imposed labels around indigeneity especially when thinking about the settler history of Spanish colonialism in America.

“It’s especially complex when talking about the history of Los Angeles because of the history of double colonization in California, due to the Spanish and the American westward expansion, and indigenous people from Mexico are situated within that in complicated ways in relation to California Natives,” she said. “I try to teach about these things in a way that keeps people’s minds open and emphasize that it might be more important to think of all indigenous people as against a settler state rather than impose or embrace colonizer-imposed boundaries of identity.”

Her new book, coming in October, is called “States of Violence: Indigenous Women Migrants and Human Rights in the Era of Neoliberal Multicriminalism.” It includes oral histories of indigenous Latin American women migrants who are victims of gender violence.

Many of the women Speed interviewed for the book are currently being detained in the United States after seeking asylum for domestic violence, and will likely be denied that due to changes in current immigration laws regarding asylum-seekers.

“Their stories are really powerful,” Speed said. “They are devastating but incredibly impressive in the sense of how much strength and courage these women have had to survive. It was a lot to carry their stories. But at least I feel like I have gotten them out there.”